The Aikawa-Koko-Kan exhibits many archaeological materials which the founder, Mr. Shiga Aikawa, collected over many years. ‘Shiga was born in 1866 as the first son of a headman of Isesaki-machi. He visited America alone in 1885. He returned temporarily from Canada in 1893, and in the next year he became a member of the Tokyo Anthropology Society. He presented some important anthropological photographs and materials of Canadian Indians to Tokyo Imperial University. He collected archaeological materials in Isesaki when he returned temporarily. After he permanently returned in 1914 to inherit his father’s, he became the chief of the post office and a member of the town assembly.

The museum was the house of an officer of the town in the Edo period. It consists of a main building, warehouse, store, Inari shrine, tea-ceremony house and storeroom. Spears and other arms, as well as shop photographs and signs which were used in this house when it was a store, are exhibited in the entrance hall. On the ceiling between the entrance hall and middle room you can see ventilation holes used for silkworm culture.

The Inari shrine is made of fire proof clay, and is also used as a safe. 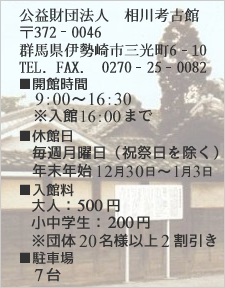